Geography, Scale, and the Global-Local Interactions; Humans and the Environment

You'll still find links to current events and other topics in the news that illustrate the continuing tension between the global and local, homogenization and diversity. The focus is on the topics of local culture, global culture, trade, tourism, immigration, and pollution.

NPR: We present several articles on immigration into the United States on National Public Radio, including

Debbie Elliott discusses the issue with Roberto Suro of the Pew Hispanic Center (19 February 2006). Carrie Kahn reports that illegal immigrants now make up approximately five percent of the U.S. labor force according to a new report by the Pew Hispanic Center. Roberto Suro says that today the demand for work in the U.S.—"pull factors"—are now stronger than "push factors" such as poor conditions in the origin countries (7 March 2006). Finally, Andrew Kohut of the Pew Research Center speaks with NPR's Melissa Block regarding the varied opinions of Americans regarding undocumented aliens (30 March 2006).

[Image licensed under a Creative Commons Attribution 2.0 license, by djtansey.]

BBC article reports that a new deal gives native Canadians greater say over how the rainforest of the Pacific Northwest is used (8 February 2006). In the past, conflicts over the use of the Pacific Coast region have led to impasses as environmentalists, logging interests, and indigenous peoples of the region have been unable to come to agreement. This new agreement negociated by several parties, including representatives of aboriginal peoples of the region, has resulted in about one-third of the region being preserved as a wildlife refuge and the rest being somewhat restricted in use.

NPR's Rachel Martin reports on movements in Holland to ban the burqa, making it a crime to wear the traditional dress of some Muslim women (31 January 2006).

Traditionally Europe has experienced emigration to the Americas, Australia, and Africa. Since World War II, the shortage of labor that occurred in economic expansion during the last half of the 20th century has led to immigration to the industrial areas of Europe from other parts of the world. Today, many European nations grapple with issues of identity as these formerly relatively culturally homogenous nations now face increasingly diverse ethnic populations. In Rachel Martin's article, some Dutch argue that the burqa oppresses women while others argue that banning it is racist and conflicts with the Dutch tradition of tolerance.

[Image licensed under a Creative Commons Attribution 2.0 license, by babasteve.]

USA
The Times' (London) Richard Owen reports on the success of a local restaurant following the opening and eventual closure of a McDonald's restaurant in its southern Italian town. (6 January 2006). It is considered by some to be a triumph of local cuisine against globalized fast food.

USA
NPR's Howard Berkes reports on Long Island, Maine's moves to secede from the mainland (9 June 2005). Movements toward union and disunion are at work in the world at various scales. In this case, locals on Long Island wish to split off from Cumberland, Maine, for various reasons, including those both economic and cultural. Their push for local self-governance contrasts with those of other portions of the state of Maine where towns are giving up close to two centuries of traditional local democratic self-rule (10 June 2005).

USA/Honduras
NPR's Kathleen Schalch reports on the debate over CAFTA, the Central American Free Trade Agreement (19 May 2005). While CAFTA will bring prosperity for some, others will see little if any change, and others may suffer due to cheap agricultural imports from the US. Lead author of a new World Bank study, Felipe Jaramillo, says that eventually everyone in Honduras will benefit as the economy grows, even if some suffer in the short term.
See also: The World's host Lisa Mullins speaks with Larry Birns, Director of the Council on Hemispheric Affairs (12 May 2005).

World
BBC The BBC reports on the end of the Multi-Fibre Agreement (MFA), also known as the Multifiber Arrangement. Originally, this agreement protected textile manufacturers in Europe and North America, but it provided protections for the textile industry in many developing countries by setting the ratio of imports to developed countries (2 March 2005). Although it officially ended in 1994, the quotas remained in place, managed by the WTO. With the dropping of the quotas, the geography of textile production is expected to shift. While countries such as El Salvador, Honduras, Bangladesh, and Sri Lanka are expected to lose out, some analysts expect China, India and other nations to greatly increase their textile production for the export market.
See also the Wikipedia entry on the Multi Fibre Arrangement and BBC News: 'EU warns China on textile exports'.

Europe
World Press Review There is a strong indication that French voters may vote against the European constitution on May 29th (22 April 2005). If France fails to support the document, it could call into question the future of the constitution. France was one of the founding members of the European Union (EU) and the constitution was negotiated under former French president Valery Giscard d'Estaing, and is nominally supported by both major French political parties.
See follow-up article 'France Turns Against Europe' by Brent Gregston (31 May 2005). 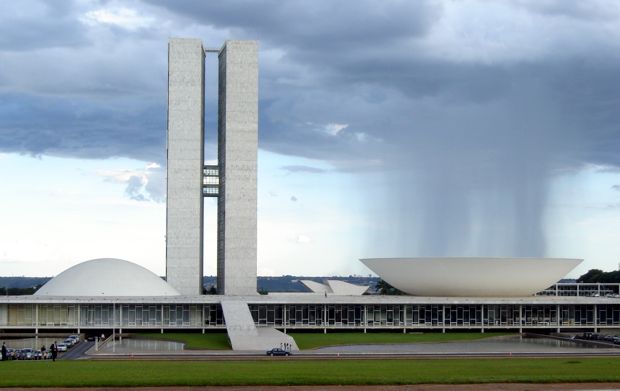 Juscelino Kubitschek, president of Brazil in the 1950s hired Oscar Niemeyer to design the National Congress complex seen above. This style of high modernist architecture has been called, The International Power style. See also the similar Empire State Plaza, in Albany, New York.